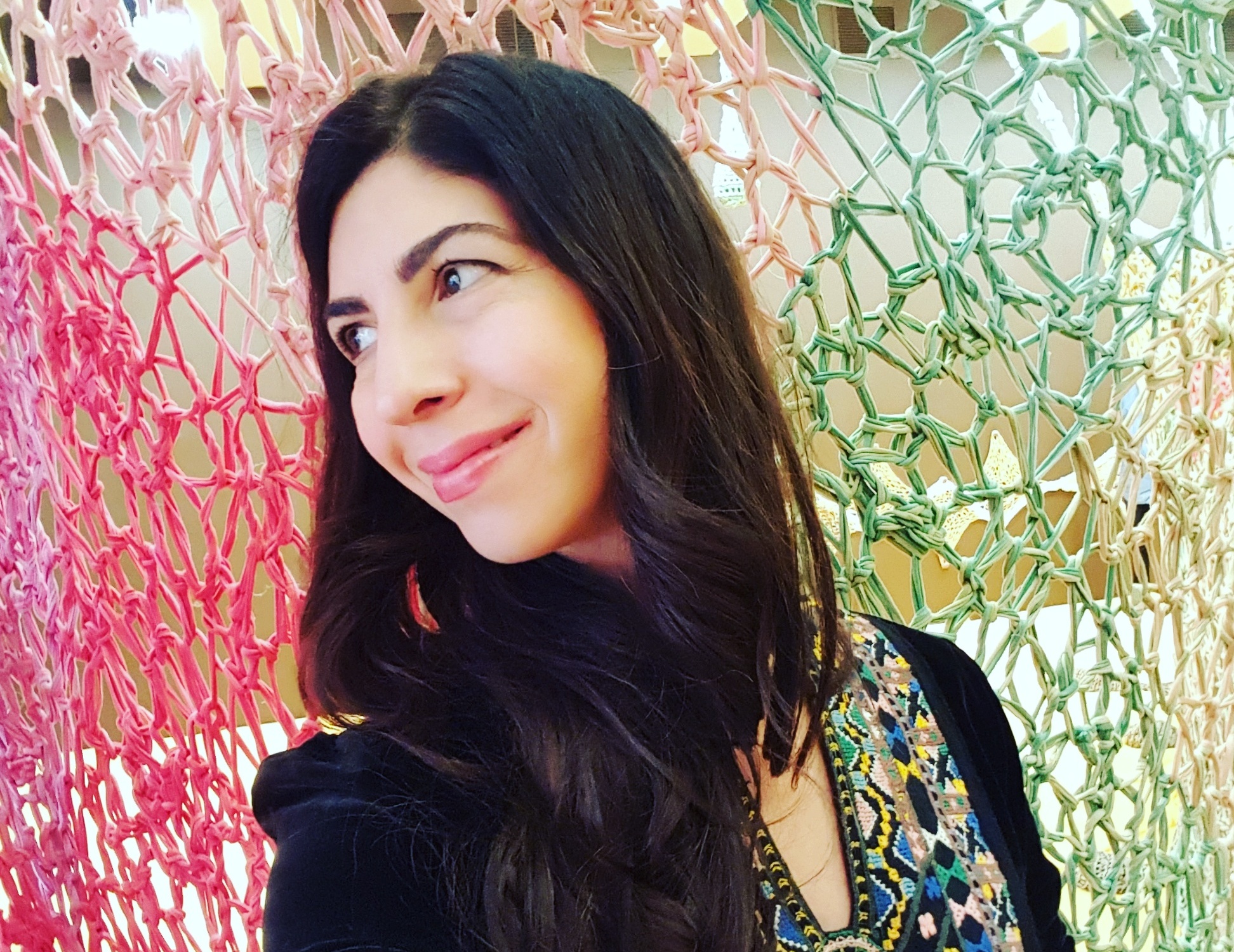 Ernesto Neto is definitley one of my favorite artits – so incredible. Since the mid-1990s, Ernesto Neto has produced an influential body of work that explores constructions of social space and the natural world by inviting physical interaction and sensory experience. Drawing from Biomorphism and minimalist sculpture, along with Neo-concretism and other Brazilian vanguard movements of the 1960s & 70s, the artist both references and incorporates organic shapes and materials – spices, spices, sand and shells among them—that engage all five senses, producing a new type of sensory perception that renegotiates boundaries between artwork and viewer, the organic and manmade, the natural, spiritual and social worlds.Born in 1964 in Rio de Janeiro, the artist continues to live and work in Brazil. He studied at the city’s Escola de artes visuais do Parque Lage in 1994 and in 1997, and also attended the Sao Paulo Museum of Modern Art from 1994 to 1996.

A special thank you to the Tanya Bonakdar Gallery for hosting a recent exhibition that I was able to really enjoy.  It was a moment of meditation and such joy ! I thank the gallery and Ernesto Neto for being an inspiration.

The Serpent’s Energy Gave Birth To Humanity –   new body of finger-crocheted immersive sculptures, installations and wall works that fill both floors of the gallery’s space, inviting the viewer into an all-encompassing sensorial experience. Emerging as a synthesis of Neto’s own decades-long practice and the artist’s recent collaborations with the Huni Kuin, an indigenous community from the Brazilian Amazon, The Serpent’s Energy Gave Birth To Humanity marks a major moment in Ernesto Neto’s practice, when formally rigorous questions intersect with notions of interactivity, connectivity and spirituality as related to the natural world.

Known for his handcrafted sculptural installations of crochet, tulle, spices and stones, Neto’s renowned art-making practice draws from a wide variety of sources, from Modernist traditions of biomorphic abstraction, through Arte Povera and American Minimalism, to the legacies of Brazilian neo concrete, conceptual and Tropilcália movements. Citing Constantin Brancusi and Lygia Clark as his artistic forebears, Neto has fused seemingly disparate influences into a cohesive language. Since the 1990s Ernesto Neto has created a body of work in which elements of improvisation and chance interconnect with the forces of tension and gravity to dictate form. The artist’s work connects the mind and body through the experience of space, using sensory perception to align the physical and the psychological. Together, these aspects form the signature voice and the unique vocabulary that has influenced a generation of artists worldwide and rendered Neto as one of the foremost artists of his generation.

Central to the current presentation is Neto’s exploration of shamanism as science, the natural world and its phenomena, and community based crafts. In 2014, Neto and members of the Huni Kuin embarked on a series of artistic exchanges that investigate the rituals and shamanistic traditions of the tribe. The Huni Kuin’s spiritual life, their desire for healing in harmony with nature, and the wisdom and serenity they draw from their deep connection with the energy of the planet, introduced into Neto’s work a new awareness to the scared dimension of nature and to its internal geometry. Drawing inspiration from these traditions, medicines and customs, his new body of work speaks of internal transformation, and adds layers of meaning to his inquiry into connectivity as a social and ecological concern. This joint exploration has taken form with major sculptural and architectural installations mounted at such institutions as The Guggenheim Museum Bilbao; TBA21, Vienna (2015); Museum of Contemporary Art Kiasma, Helsinki, Finland (2016); KUNSTEN Museum of Modern Art, Aalborg, Denmark (2016).

At Tanya Bonakdar Gallery, viewers are encouraged to explore, touch, smell and even wear the objects on display. At the entrance to the gallery, a massive crochet structure engulfs the main space and invites the viewer to wander through it, as the exhibition slowly unfolds beyond the knitted net. This massive, womb-like structure invites interactivity that is at once intellectual and physical. Blurring the lines between viewer and artwork, the installation physicalizes Neto’s concept of living sculpture – a practice in which process is equal to outcome.

Key to the exhibition is Neto’s continued use of crochet as a formal and symbolic element. The act of knitting transforms small-scale artisanal craft to the building blocks of large-sized sculptural installations and intricate two-dimensional artworks. The slow, collective activity, which is precisely planned yet organic, passionate, on the verge of ritualistic, is yet another powerful expression of Neto’s artistic inquiry. Dynamic color patterns are conjured by the craft of hand dying each thread and mixing the colors. This represents a fusion of cultures, and the merge of life and nature into a more unified experience.

At the heart of the gallery’s space, Adam Boa Eve Apple Egg (2016) – a round, canopied structure – hangs from the ceiling to the floor. Inside this room, a finger-knitted carpet traces the shape of the overall structure, evoking the image of an infinite serpent – an important motif in the Huni Kuin’s vocabulary and to this exhibition. A protagonist in Brazilian mythology as well as in Judeo-Christian tradition, the boa represents our connection with the cosmos through different types of acquired knowledge. The spirit of the boa is an energy” says Neto, “it’s a vibration that is inside all the matter, and in all life.” Tree-like columns filled with leaves and stones invoke the tribal iconography of nature while serving as a counter balance for the crocheted architecture – bringing together the tradition of the Brazilian Neo Concrete movement with the rituals of Brazil’s indigenous cultures.

Neto’s career long investigation of our relationship with nature is further amplified in the exhibition as its informed by the Huni Kuin’s spiritual and corporal understanding of the cosmos. Here, the artist pivots from the Western legacy of classification and systematization, its linear environments and excesses of information to a more heterogeneous, multi dimensional environment, an environment which, much like the forest, hums with energy that is created simultaneously by all of it inhabitants, be it the plants, birds, the earth or the air.

On the second floor, living plants and crochet colonies filled with spices summon a sensory experience of smell, texture, tactility and color. The shape of an evolving double helix appears interchangeably as a serpent, a ladder, a tree or even a DNA sequence throughout the exhibition. In tandem with the relational world-view of the Huni Kuin, this fluctuating form bridges the gap between all spatial-temporal components of the cosmos. Combining his signature biomorphic shapes with the sacredness of nature, Neto creates an alluring environment of color, texture, and smell that collapses the distance between viewer and artwork, familiar and distant, known and unknowable. 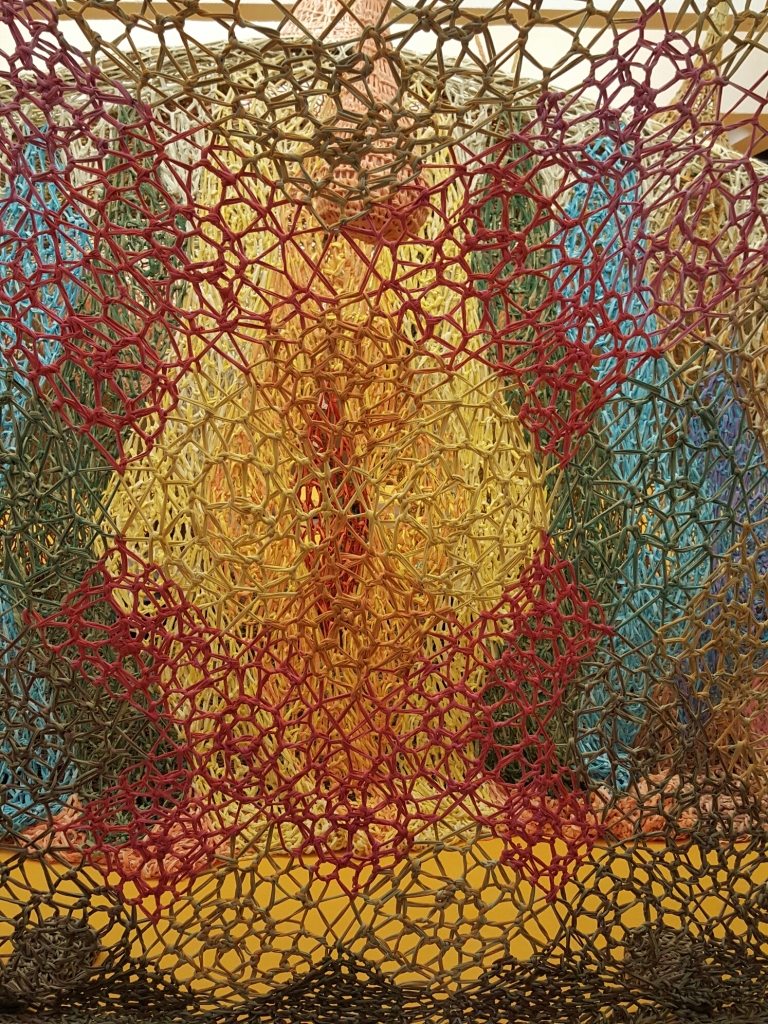 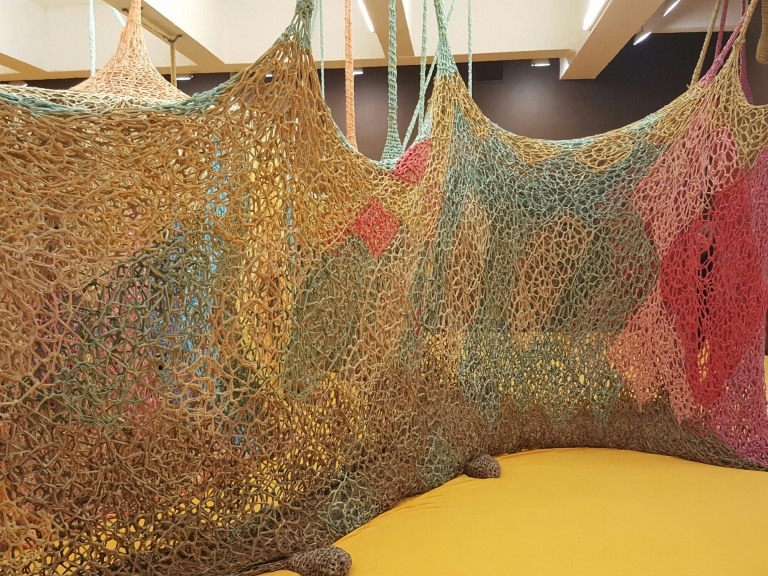 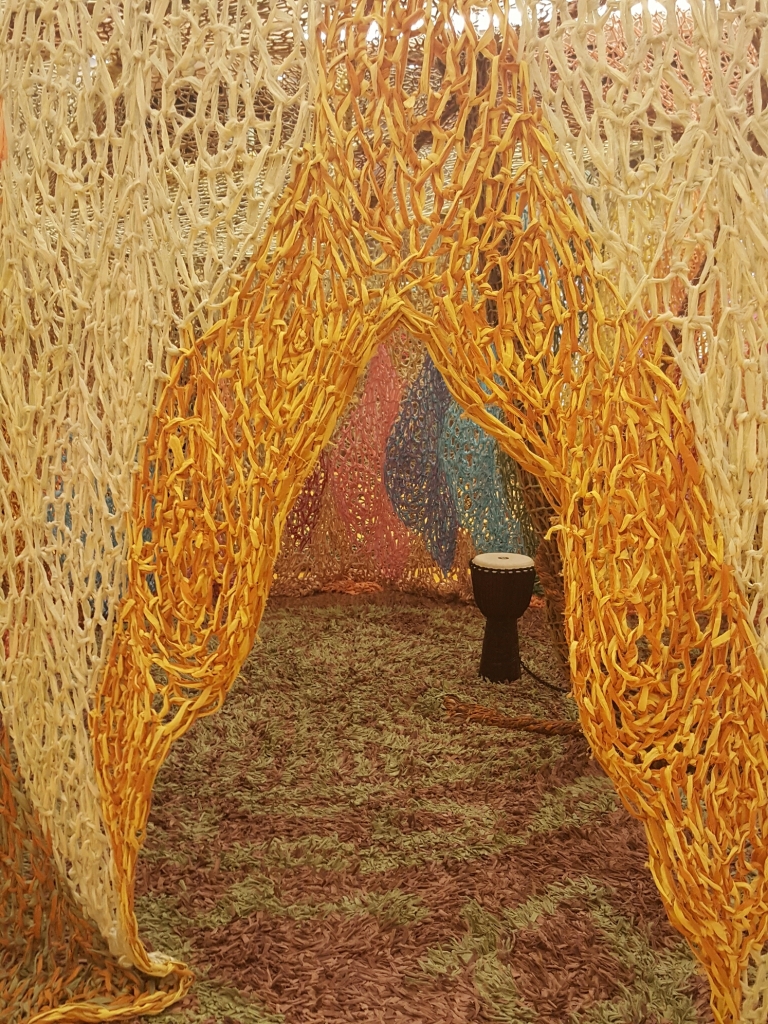 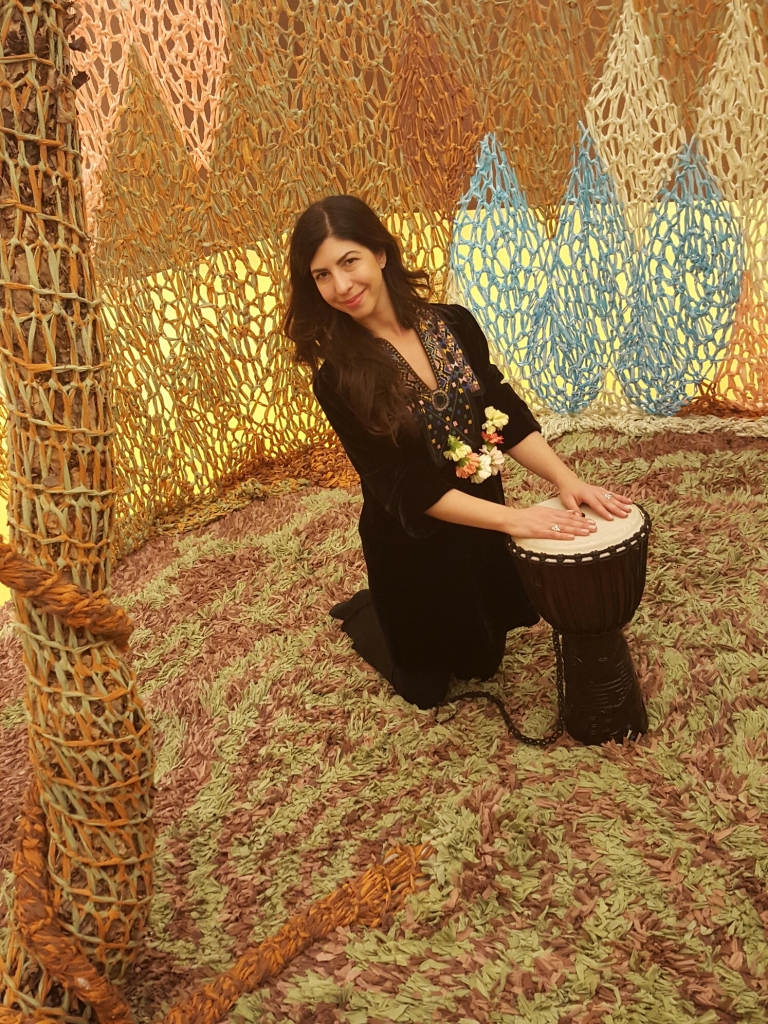