We celebrated their 50th wedding anniversary last year at St. Patrick’s Cathedral and it was beautiful

So talking of LOVE and all of that you need to see this amazing benefit / performance on the 19th of April – it is a Monday not this coming Monday the following Monday ..

Anyway read up, buy your tickets… and fall in LOVE …

We are opening a new restaurant next week and I am now djing the opening …. Putting a SPRING play list together and want to hear from you what you will be listening to this Spring…

We will publishing the mix on some of the blogs we are affiliated with so everyone can enjoy your picks !

“With Spring, romance and everything lovely in the air, there couldn’t be a better time to celebrate than at WET’s annual LOVE benefit; April 19th 2010. Famous in New York City as one of the year’s most creative, fashionable and feel good benefits, WET’S LOVE feels much more like a party, with some of entertainments most brilliant and promising talents performing a series of short places all on… LOVE. The short plays, which highlight all the different ways we love one another, the world and ourselves raises vital funds to help WET in their primary goal to end gender inequality in the Entertainment Industry.  As well as supporting up and coming female writers, directors and actors though celebrating LOVE on April 19thyou’ll also be raising much needed funds to help support WET’s groundbreaking outreach program ‘Risktakers’ for New York City teens.”

For more information and to secure your ticket for this fantastic evening visit www.wetproductions.org

“WE EMPOWER TOGETHER” AWARD

What: LOVE is a one night only benefit performance of short plays on love, written by some of the hottest women writers in film, theater and TV, performed by celebrated actors, followed by WET’s notorious and wildly gorgeous, annual Gala. The evening is a celebration of WET’s 11th year, and will feature the inaugural “We Empower Together” award, presented by Nora Ephron (Julie and Julia, Sleepless in Seattle, When Harry Met Sally) to honoree Lynda Obst (Acclaimed Producer of The Invention of Lying, Sleepless in Seattle). The We Empower Together Award celebrates a woman in the media whose extraordinary accomplishments have paved the way for other women to succeed by changing the way the world sees women and women see themselves.

WET will also honor Maria Zuckerman (Vice President HBO Films, Grey Gardens) with “The Risk Taker” award, recognizing a woman in the middle of her career who is producing groundbreaking female driven projects.

The LOVE benefit is always one of the hottest tickets in town, featuring work by the entertainment industry’s most dynamic artists, followed by an outrageous and abundant after party, all to celebrate WET’s mission and work.

Who: Produced by founders Sasha Eden and Victoria Pettibone, and directed by Abby Epstein (The Business of Being Born) the evening will feature a performance of short plays about LOVE performed by the hottest up and coming and lauded actors: Emmanuelle Chriqui (Entourage), Rosemarie DeWitt (The United States of Tara), Ron Livingston (Sex and the City), Michael Stuhlbarg (A Serious Man), Chris Messina (Julie and Julia), Mamie Gummer (Taking Woodstock)Jennifer Westfedlt (Kissing Jessica Stein), Carla Gugino (Watchmen) and Zachary Quinto (Star Trek) with more to be announced! 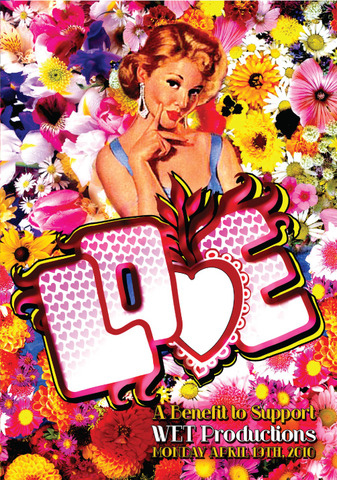